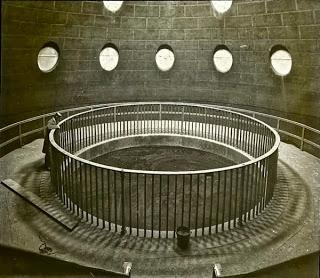 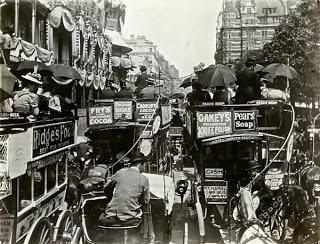 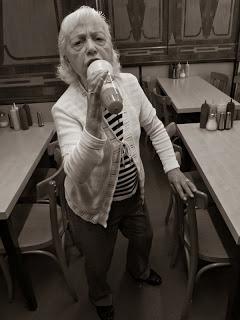 After Salon No 9's glimpse into the future of London, SALON No 10: A NIGHT IN OLD LONDON travels back to the city of a century ago for a very special evening. With extraordinary unseen images and in conversation, story and song will be the Gentle Author of Spitalfields Life, London ballad singer Henrietta Keeper and pianist and boxer David Power.

The Gentle Author, curator of one of the capital's most extraordinary and well-loved blogs Spitalfields Life will present a selection of Magic Lantern slides showing London a hundred years ago. Drawn from the collection of the London & Middlesex Archaeological Society and unseen for generations, these magnificent images conjure up a distant yet immediately recognisable city of fog & smogs. The Gentle Author will tell some of the stories connected with the images, join in conversation with his guests and will be accompanied by David Power at the piano.

David Power, 84, a musical prodigy from the age of five was shut out from the musical establishment because of his class background but performed around the world in the British army, on Thames pleasure boats and in the Lyons Corner House, Piccadilly.  He worked in the Spitalfields Market in the nineteen-forties selling nuts, was a boxer and a black taxi driver and still performs a repertoire of classical, London based and improvised music

Songs will be performed by Henrietta Keeper, a thirty year stalwart and the last surviving member of the the Tate & Lyle Concert Party. Henrietta still performs every Friday afternoon at E.Pellcci in Bethnal Green, singing songs taught to her by her grandfather - a living link to a lost London musical culture.

The Salon will mark the publication of The Gentle Author's London Album, a magnificent hardback with more than 600 pictures of London appearing in print for the first time including the ostentatious trade cards of Georgian London, breathtaking lantern slides of Victorian London, images of bizarre car crashes in Clerkenwell, heroic Spitalfields nippers, the soulful dogs of old London, Barn the Spoon, the spoon carver, and Aaron Biber, London’s oldest barber..

Drawing comparisons with Pepys, Mayhew and Dickens, The Gentle Author of Spitalfields Life has gained an extraordinary following in recent years, by writing hundreds of lively pen portraits of the infinite variety of people who live and work in the East End of London.