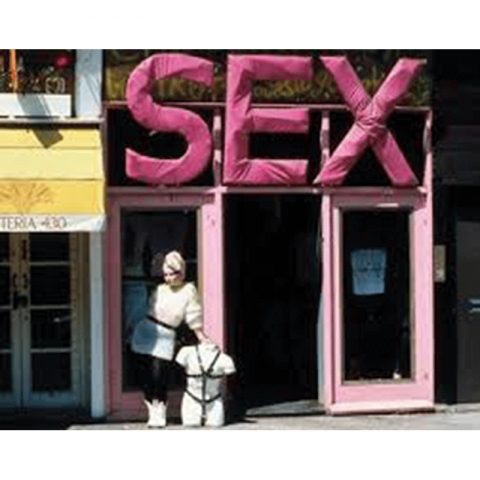 Each ticket includes a 'gob' of Hendricks mohican stiffener

Walking down the King's Road today, one of the last discriptions that comes to mind is 'Seditionary'. It is hard to believe that forty years ago this street of boring, expensive shops was the cradle of a loud, brash, rude explosion in music, clothing and attitude that properly put the wind up the establishment - well, for a little while at least.

What was Punk? Acres of prose have been written about it but let's hear from two people, ROGER BURTON and JOE KERR, who were actually there and who join us to tell personal tales of the time when PUNK was more than a vintage fashion option or a Boris-approved nostalgia trip.

In a back street in Bloomsbury, exists an extraordinary architectural and cultural anachronism: THE HORSE HOSPITAL It is the last counter-cultural institution in central London and has been 'providing space for underground and event-garde media since 1993'. Its director for all that time is ROGER BURTON. It might be said that if the spirit of London punk lives on, it lives in The Horse Hospital. And who would know better than Roger - the man who re-designed Vivienne Westwood’s and Malcolm McLaren's Kings Road shops "Worlds End" in 1980, and "Nostalgia Of Mud" in 1982?  Roger shares his personal recollections of the punk era and the couple who have been credited more than any other with its birth.

JOE KERR mixes the roles of historian of cultural studies and bus driver, a combination which gives him a unique perspective onto the life of the city he arrived in as an innocent country boy forty years ago. Joe describes the run-down London he found and the explosive impact of punk on himself and on the city around him. He will evoke the furtive life of a young punk, avoiding gangs of teddy boys and clubbing in the seedy demi-monde of Soho and Covent Garden. He will talk about his brief career as manager of a struggling punk band that only achieved cult status in retrospect. He will also refer to the bitter political climate in the era of the Winter of Discontent, the battles against racism and fascism, the constant tussles with the police, and he will evoke the despair and disillusion that followed the end of punk and the rise of Thatcher.

ROGER BURTON is  an archivist, stylist, consultant and costume designer. He began working in the vintage clothing industry, supplying garments to shops in the UK, Europe and Japan in the 1970s. After providing the outfits for Quadrophenia, he formed the Contemporary Wardrobe Collection and now runs The Horse Hospital which houses The  Collection, more than fifteen thousand youth culture garments he has collected from the early 1940s to the present day and runs an extraordinary program of counterculture projects, events and exhibitions.

JOE KERR is a writer, broadcaster and architectural historian. He has a particular passion for London, where he has lived for the last forty years. His co-edited book, London from Punk to Blair embraced precisely this time period, and was intended to delineate the enormous changes that have convulsed the city in the time that he has known it. Joe is Head of Critical and Historical Studies at the Royal College of Art, and is also a London bus driver at Tottenham Garage.